It might be the cuddliest medical device ever to cause an ethical quandary. 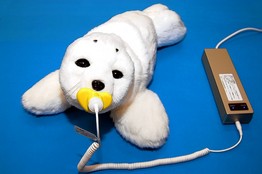 Five years ago, a Japanese robot manufacturer introduced Paro to the world. Built to resemble a baby harp seal—with a plush coat of antibacterial fur—Paro was hailed in Japan as a pioneer among socially interactive robots, one that would help lift the spirits of millions of elderly adults.

It never quite caught on. “It doesn’t do much other than utter weird sounds like ‘heeee’ or ‘huuuu,'” says Tomoko Iimura, whose adult day-care center in Tsukuba City keeps its Paro in a closet.

Now Paro has come to American shores, appearing in a handful of nursing homes and causing a stir in a way that fake seal pups rarely do.

Nursing-home workers and academics who study human-robot interaction are trying to figure out whether the $6,000 seal, cleared last fall by U.S. regulators as a Class 2 medical device (a category that includes powered wheelchairs) represents a disturbing turn in our treatment of the elderly or the best caregiving gadget since the Clapper.

“Some of our residents need more than we as human beings can provide,” says Marleen Dean, activities manager at Vincentian Home, one of four facilities run by Pittsburgh-based Vincentian Collaborative System. Vincentian Collaborative recently used a $55,000 grant to purchase eight Paros and finds them especially comforting to patients with dementia. “We’ve tried soft teddy bears that talk and move. But they don’t have the same effect.”

Bill Thomas thinks it’s inhumane to entrust the task of emotional support to a gadget.

“If you give me a robot that helps perform mundane tasks associated with caregiving, such as vacuuming or doing the dishes, I’m all for that,” says Dr. Thomas, founder of the Green House Project, a campaign to make nursing homes smaller and more like regular houses. But “if we wind up with nursing homes full of baby-seal robots, the robots will be trying to fulfill the relationship piece of caregiving, while the humans are running around changing the beds and cooking the food.”

In several countries, robots are starting to play a role in elder care. In Japan—where 22.3% of the population is over 65—robots handle such tasks as feeding patients and helping disabled people move their limbs. Also planned are wheelchairs with robot arms and robotic diet-and-exercise coaches.

Paro, which cost $15 million to develop, isn’t a mechanical aid. It serves as a low-maintenance alternative to the cats and dogs many nursing homes import for “pet therapy” visits. Homes with Paro needn’t worry about allergies, scratches and bites, or walkings and feedings.

Inventor Takanori Shibata says he designed Paro to evoke memories of pets and babies. It weighs about 6 pounds, feels warm and sucks on a pacifier-like charger.

Powering it are two 32-bit processors, three microphones, 12 tactile sensors covering most of its fur, touch-sensitive whiskers and a system of motors that silently move its parts. They allow Paro to recognize voices, track motion and “remember” behaviors that elicit positive responses from patients, says Mr. Shibata.

His company, Intelligent System Co., has sold 1,300 Paros in Japan, mostly to older adults who live in buildings that bar animals or want a hassle-free pet. Japan’s nursing homes generally haven’t embraced pet therapy, Mr. Shibata says, and balk at paying for a costly robot that isn’t covered by insurance.

But Paro has found a following in much smaller Denmark. Since late 2008, Danish nursing homes have purchased 110 Paros, mainly with public funds, says Troels Vilms Pedersen, a team leader at the nonprofit Danish Technological Institute, Paro’s European distributor. Since a 2008 study found that Paro soothed dementia patients and helped them communicate, DTI has encouraged every Danish nursing home to buy one, Mr. Pedersen says.

Sherry Turkle, a professor in the Science, Technology and Society program at the Massachusetts Institute of Technology, acknowledges Paro’s potential as a communication aid, but warns against regarding it as a companion. “Why are we so willing to provide our parents, then ourselves, with faux relationships?” she asks.

Danish filmmaker Phie Ambo, who spotlighted Paro in her 2007 documentary on interactive robots, “Mechanical Love,” dismisses such concerns. “When I came into nursing homes and found people sitting in rocking chairs with dolls, no one lifted an eyebrow.”

DTI requires caregivers to attend Paro seminars, where they discuss such issues as whether it’s OK to leave an elderly person alone with a Paro, and whether patients must be told it’s a robot. Don’t allow someone to “escape into a strange seal robot’s universe,” cautions Lone Gaedt, senior consultant at DTI.

Vincentian Collaborative has made Paro one of many formal “interventions” used before staff medicate dementia patients who become very agitated or aggressive.

One recent morning, staff at Marian Manor in Pittsburgh, one of Vincentian Collaborative’s homes, circulated three Paros among residents gathered for a sing-a-long. As 77-year-old Anita Biro sat down at a table, she berated two fellow residents and told them to leave, recalls Beth Kuenzi, activities manager for the home’s dementia unit.

But when Ms. Kuenzi put Paro in front of Ms. Biro, her mood changed. As Ms. Biro stroked the robot’s synthetic fur, the machine batted its eyelashes and tracked movement with its head and eyes.

Aides also take Paro to residents’ rooms to get them to socialize. At another Vincentian home, Lois Simmeth, 73, doesn’t always participate in group activities, but she ventures into the hall when she hears Paro’s sounds.

“I love animals,” explains Ms. Simmeth. She whispered to the robot in her lap: “I know you’re not real, but somehow, I don’t know, I love you.”

Says Holly Raidabaugh, Lakewood’s director of marketing: “I think the staff took to him more than the residents did.”

“My family and I would like to thank both you and Betsy for your assistance with our Dad, it was a great help. We appreciated everything you both have done for our family. Thank you both again and on behalf of our dad’s family we appreciated all of your help. I don’t think we would have gotten this far without your assistance.” -P. Perkins