Let’s say your doctor has advised you to get an X-ray or a CT scan. You’re likely to book the appointment without giving it much thought. But before you do so, it’s worth asking whether you really need the test.

In the 1980s, about 15% of a typical person’s lifetime exposure to radiation came from medical tests. Now these tests account for about half of one’s lifetime exposure. Why the increase? Doctors are now prescribing more imaging tests, and newer tests, such as computed tomography (CT) scans, produce more radiation than those available in the past.* This is true even though some CT scans now have lower radiation levels than when they were first introduced.

There’s no question that imaging tests save lives. 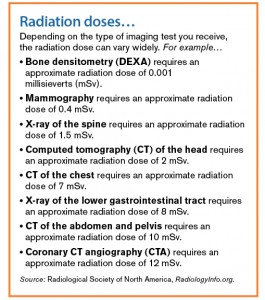 They can reveal hidden problems and have greatly improved doctors’ ability to diagnose and treat serious diseases. But the use of CT scans, to give just one example, has increased 20-fold in the last 25 years. Fortunately, the cancer risk from a single scan—or even a few scans—is negligible.

The real risk: Research shows that repeated CT scans over a lifetime could increase one’s risk of developing cancer by 2.7% to 12%. Cancers that have been linked to medical radiation include leukemia and malignancies of the breast, thyroid and bladder.

Everyone is exposed to small amounts of radiation. Cosmic rays, radon gas and radioactive minerals in the soil are among the most common sources. Typically, the amount of radiation from these “background” sources adds up to only about 3 millisieverts (mSv), a standard unit of measurement, a year—not enough to worry about.

However, imaging tests exponentially add to your lifetime exposure. Examples: About 1.5 mSv from a spinal X-ray…6 mSv from a pelvic CT scan…and about 20 mSv from a whole-body positron emission tomography (PET)/CT scan to detect cancer.

Before agreeing to a test, ask your doctor why it’s needed and if the results will possibly change your diagnosis or treatment (if not, you don’t need the test). If an imaging test is crucial, you can ask whether there’s a radiation-free alternative, such as ultrasound, or whether a lower-radiation test is available—say, an X-ray instead of a CT scan. Also be sure that the medical facility where you will receive the imaging test has been accredited by the American College of Radiology (ACR). To check a facility’s accreditation status, go to the ACR.org.

Also helpful: Keep a log of any radiation-based tests that you get. You can refer to your radiation history whenever you and your doctor are considering a medical test that will expose you to radiation.

My advice: Take Egb 761 for a week after having a CT scan or other imaging tests. It’s available at health-food stores and from online retailers such as Amazon.com. Typical dose: 120 mg daily. Good product: Tebonin.

Possible side effect: Egb 761 can increase bleeding when it’s combined with aspirin or other blood-thinning drugs, such as warfarin (Coumadin). Ask your doctor if it’s safe for you to use.

An animal study published in The British Journal of Radiology found that hesperidin taken before radiation exposure reduced blood-cell damage. In human tests, results were similar—it reduced radiation-induced damage by about one-third.

My advice: Take 250 mg of hesperidin about one hour before testing. It’s unlikely to cause side effects.