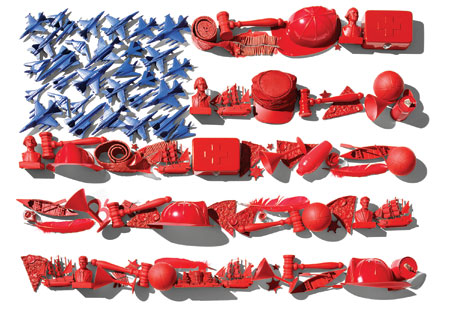 2. There is enough water in Lake Superior to cover the entire landmass of North and South America in one foot of liquid.

3. Meanwhile, the US sells enough pizza every day to cover 100 acres.

5. Three of the world’s five oldest rivers flow through America: The New, the Susquehanna, and the French Broad Rivers are each hundreds of millions of years old.

6. But as a nation, America is young: the US government is still paying one pension on behalf of a Civil War veteran (to his 85-year-old daughter).

7. Statistically, the deadliest job in America is … president. Of the 44 men who’ve held the post, four have been assassinated in office – a rate of roughly nine percent (or about one in ten) killed on the job.

8. The only US president to own a patent and a saloon: Abraham Lincoln. His patent was for a device to lift boats over sandbars. His saloon was a miserable failure.

9. The only president who was an executioner: Grover Cleveland (as sheriff of Erie County, New York, he hanged a murderer).

10. An estimated one in ten Americans could be a blood relative to one of the original 102 pilgrims who arrived aboard the Mayflower in 1620.

11. And roughly one in three Americans has his or her fingerprints on file with the FBI.

12. According to the World Giving Index, Americans are the most likely people in the world to help a stranger.

13. Case in point: slightly more than 69 percent of firefighters in the United States are volunteers.

14. The real Independence Day – the day Congress voted America free from British rule – is July 2, 1776. July 4 is just when John Hancock put the first signature on the Declaration of Independence to spread the word.

15. Finally, the real acme of the American justice system? That would be the basketball court on the fifth floor of the Supreme Court building. It’s known as the Highest Court in the Land.